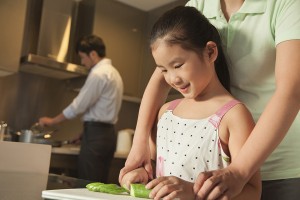 Now that my kids are pre-teens and teens, dinnertime keeps getting pushed later and later, squished between after school activities and homework time. I know that this is a tough topic for families today, who often think about time together the same way starving people think about food. Even if you are managing to feed your kids a reasonably healthy dinner, few of the benefits of family mealtimes are transmitted when parents eat separately from their children, or when we eat in front of the TV.

The Benefits
Kids who eat dinner with their families regularly are more emotionally stable and are less likely to abuse drugs and alcohol. They get better grades. They have fewer depressive symptoms, particularly among adolescent girls. And they are less likely to become obese or have an eating disorder. Family dinners even trump reading to your kids in terms of preparing them for school. And these associations hold even after researchers control for family connectedness, which means that the benefits of family meals go above and beyond being close-knit as a family.

Why is dinnertime such a powerful tool for raising happy kids? How can we as parents get the most out of it? Adults model important things during dinner, like…

…Adventurous Eating
The most obvious thing that we grown-ups should be modeling during family mealtimes is healthy eating. Eating a VARIETY of foods is important for health—and physical health is very important for happiness. Unfortunately my kids would prefer to eat mac n’ cheese (specifically the shells with white cheddar) 3 meals a day. To say that they resist new foods would be a gross understatement. I read once that this hearty resistance to new foods is an evolutionary trait designed to keep our young from eating anything green or unripe. Which makes it up to us parents to train our children to eat lots of different kinds of foods.

Here’s how: Research shows that kids learn to like new foods by watching adults and other kids eating them. Here’s the bad news: it’s all about repetition. Meaning your kid needs to watch you eat the food, uh, a lot—maybe daily, maybe for years.

Paul Rozin, an anthropologist, traced how kids in Mexico learned to eat spicy foods. Most Mexican babies and toddlers hate spicy foods, but they grow up watching adults eating it and around the time they are 5 or 6 years old they begin enjoying what we Americans would think of as “adult food.” What I think is funny about this study is that the family dogs that hang out near the table also learn to eat spicy foods through their owners’ modeling—stray dogs that never eat with families but have equal access to spicy foods can’t be trained to eat them.

I talk a good game about rarely serving my kids something separate than what the adults are eating, but walking the talk is less of a strength. “My kids eat anything, don’t fix them something different!” I say blithely when we’re over at friends’ houses. Molly gets that adults love kids who eat anything, and when faced with a plate of “new” food, she’ll pretend to take a bite and then will declare with gusto, “I LOVE CUCUMBER RAVIOLIS!” to which all the adults ooo and ahh and say things like, “Golly, I wish Jack would eat spinach pudding!” Nine times out of 10 Molly hasn’t even tasted anything.

Second only to eating, cooking is my favorite hobby. So it is a little disheartening when there is no one eager to eat my labor of love without first being bribed or cajoled. Still, what I should do is just expose them to the food (it’s on their plate, I’m eating it) and leave it at that. The experts don’t recommend the type of encouragement to eat that I am prone to: “Fiona, if you take three bites of that delicious slow-cooked pazole your mother worked so hard to make you can have two Girl Scout cookies for dessert.” Nutritionist and psychologist Ellyn Satter gives us a good rule of thumb: “the parent is responsible for the what, when and where of feeding, and the child is responsible for the how much and whether of eating.” Hard for me to do, but after about 6 months of always putting salad on my kids plates and then letting them ignore it, they now often eat their salad.

…and Social Skills
So many social skills are learned at the dinner table I hardly know where to begin. The research is really compelling around language development and dinnertime – and language is the most important facet of social intelligence that we have.

A team at the Harvard Ed School wanted to know where children learned the rare words that they had found were particularly good markers of literacy. Of the 2,000 words they were looking for, only 143 of them came from parents reading to their children. More than 1,000 were learned at the dinner table. This is why dinner loses its power when we isolate kid meals from adult meals. My 13-year-old isn’t going to be able to teach my 11—year—old all those SAT words (though I’m sure she could teach her about 250 euphemisms for, oh, just about any word they’d lose screen time for using).

Manners are a more important social skill than we sometimes think. As a sociologist, I believe that certain social norms teach kids about the emotions that make up a happy life. When I say, “Molly, don’t interrupt your sister,” I am teaching her about reciprocity and empathy. When they watch me offer a guest the best cut of meat, they learn generosity. Simple acts of gratitude, like saying thank you to someone for passing the salt, are happiness building blocks.

Social skills, including language, are just that – they are skills that are built over time, better learned by example than explicit instruction. Kids develop any skill better if they learn it in a routine situation that feels safe, and the dinner table might just be the best place to teach and learn certain skills. The good news is that there needn’t be loads of adults around—single parent families who have regular dinnertime routines reap the same benefits.

If you have trouble getting food on the table, check out my Happiness on Autopilot online class for added incentive and support.

A version of this article was originally posted on Greater Good.