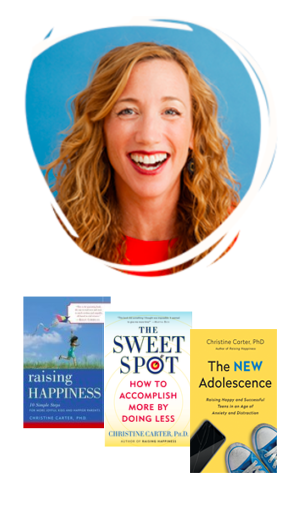 Christine Carter, Ph.D., is an author, speaker, and coach dedicated to redesigning the way we work—so that we can lead our most joyful, productive, and fulfilling lives. She’s a leader at BetterUp, where she designs one-to-many coaching experiences that drive transformation for people, teams, and organizations.

As a sociologist, she’s sought to inspire large-scale, systemic change in our most common and influential social structures: corporations, families, and schools. She has a particular interest in how cultures and institutions foster certain behaviors, beliefs, and emotions while inhibiting others.

For many years, Dr. Christine Carter was the executive director of UC Berkeley’s Greater Good Science Center (GGSC), where she remains a sociologist and Senior Fellow. She writes an advice column for Greater Good magazine that is syndicated on PsychologyToday.com and many other websites. Combining scientific research and practical application, she offers her clients, readers, and audiences not only a way to cope with modern pressures, but tactics to truly thrive.

Dr. Carter has given three TedTalks, the most recent of which was in the top 5 most viewed in 2021. She has appeared on dozens of television and radio shows, including the “Oprah Winfrey Show,” the “Dr. Oz Show”, the “TODAY” show, the “The Daily Show with Jon Stewart,” “CBS Sunday Morning,” PBS, NPR and BBC Radio. She has been quoted or featured in every major newspaper in the US, including The New York Times, USA Today, the Chicago Tribune, the San Francisco Chronicle, The Washington Post, the Boston Globe, and The Wall Street Journal. In addition, she is often quoted in lifestyle magazines such as Real Simple and in dozens of other online news sources.

She and her husband have four college-age children. They live in Northern California, with their two dogs and four hens.

Dr. Christine Carter has been featured in:

Get more information about having
Dr. Carter speak at your next
event here.