This last weekend was my nephew’s first birthday party, and because he is absolutely the most adorable baby EVER and I love him so much, I’d planned on widely documenting the occasion, in HD video and still photography.

You know, just so we’ll never ever forget the adorableness of it all. 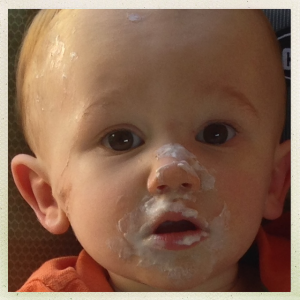 I forgot my big camera, but that didn’t really matter because every adult and teenager there was snapping away with their phone cameras like crazy paparazzi (myself included).

Then I remembered a follow-up study. The “photo-taking impairment effect,” as researchers call it, didn’t occur when people were asked to zoom in on a detail of the object they were photographing. And so I went back to photographing, this time zooming in on my nephew’s messy face (did I mention that he is adorable?).

Here is what researchers think is happening: When we take a picture, we delegate memory-making to our camera, and our brain stops trying to make the memory itself. But when people photograph a specific part of an object, their memory is not impaired, presumably because their brains still need to make sense of the whole picture in order to photograph the detail.

Take Action: We tend to feel happiest when we give the people we love our full attention. It is hard to be fully present at the same time that we are photographing something. So whether we are after a happy moment or a happy memory, often the best thing we can do is just put our camera down.

Join the Discussion: Have you noticed that you remember less about an event or special moment when you photograph it?