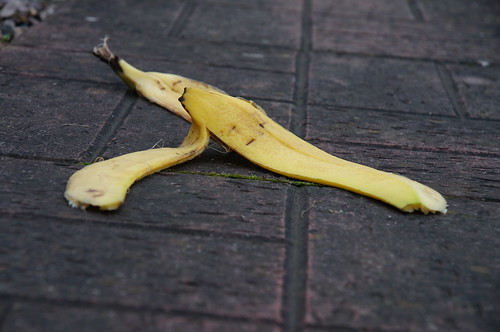 We all understand that when we first attempt to drive a car or ride a bike, we’ll make mistakes. Behavior change is no different; it’s a process of slipping, learning from the mistake, and trying again.” ― John C. Norcross, Changeology

Ah, the beginning of February.

If you made a New Year’s Resolution a month ago, and you’ve kept it so far, take a victory lap. The other (probably half) of you? Don’t worry about it if you are faltering. Worry and self-criticism don’t work. Don’t stress, but also…don’t just sit there.

This may be blazingly obvious, but in order to do better tomorrow, you’ll need to know what causes your trip-ups. What obstacle have you failed to see or plan for in the last week or so? How does your resolution need tweaking? Did you take on too much too soon? Figure it out, and make a specific plan for what to do if you find yourself in a similar situation again.

When I was first trying to squeeze meditation into my morning routine, I felt like I was failing more mornings than I was succeeding. Every day brought a new tweak to the routine. For example, at first I thought that I could get away with seven hours of sleep at night. But after three or four mornings of pushing the snooze button I realized I was too tired and had to turn the lights out earlier. Then I thought that I could read before bed on my iPad; that was a no-go, too, as the light from the screen kept me from falling asleep quickly.

For several days in a row, I didn’t foresee minor obstacles that proved challenging, like it being too cold in the house for me to not leap straight from my warm bed to my hot shower. But after I’d encountered each obstacle once, I could make a plan for what to do the next time. It can take many months to settle into something as large as a new morning routine.

So don’t worry about it if you are faltering — but don’t give up, either! Figure out how you need to tweak your habit to eliminate obstacles, and carry on!

Want more advice for establishing (and keeping) a new habit? Sign up for my FREE 90 day — text, email, and Facebook-based — coaching program to help you make and keep resolutions that stick.