Want to boost your mood this week? Challenge your family members to an old-fashioned board game.

A whopping 91% of families who play games report that playing games together improves their mood — even for 13-17 year olds — according to a recent survey (commissioned by Hasbro but conducted by an independent research company). Additionally, the survey found that the more a family plays games together, the more satisfied parents tend to be with their family time. 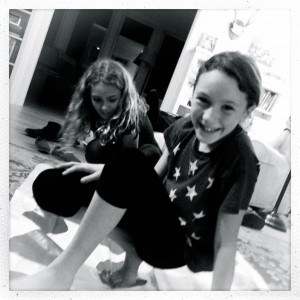 1.) Don’t keep score or automatically let kids win.
Although rivalries can be really fun (47 percent of those polled said the fiercest rivalries were between parents and kids during family game play) they can obscure the benefits of family game night. Once everyone is enjoying the process and fun of playing games together — without obsessing over who is winning or losing — then go back to keeping score, to teach the important skill of winning and losing gracefully.

2.) Don’t feel compelled to play games that bore you. Make sure you have a selection of games that work for everyone in your family, no matter their age. Family game night can be fun for everyone.

3.) Be the fun family in your neighborhood. As kids get older, time with their peers becomes more important to them than time with their family. Don’t let these priorities conflict! Instead, encourage kids to invite a friend or two to come to your family game night. Let the teens choose the food and the music (but check their smartphones and devices at the door!). On weekends, plan for game night extensions, allowing teens to continue play without parents and younger siblings.

4.) Have a board game date-night. My husband and I used to love to play dominoes after the kids would go to bed. Even if you don’t have kids at home, or if they are too young for a family game night, turning off the TV and tuning into your partner for a fun game can lift your mood.

Take Action: Decide which day of the week will be your weekly game night, and then be consistent so that it becomes a ritual anticipated by everyone.

Join the Discussion: What games do you love to play? Inspire others by leaving a comment, and be sure to mention the ages of your children if you’ve got them.