This post is from a series about how to focus from my online course, the Science of Finding Flow.

It is incredibly easy to tip into “cognitive overload” these days, as we have information (and stuff) coming at us from all angles. In 1976, supermarkets stocked, on average, 9,000 items. Today, they stock an average of 40,000 items. According to cognitive neuroscientist Daniel Levitin, information scientists have quantified how overwhelmed by information the poor human brain is. “In 2011, Americans took in five times as much information every day as they did in 1986–the equivalent of 175 newspapers. During our leisure time, not counting work, each of us processes 34 gigabytes or 100,000 words every day.” 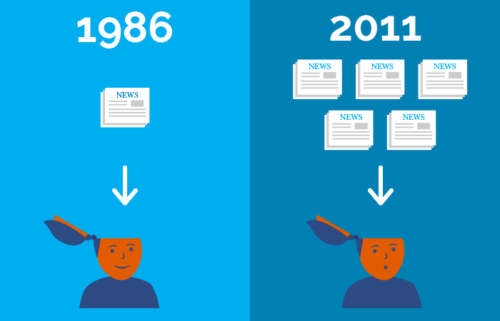 So how do we deal with this overwhelming amount of stuff and information?

The corollary to the belief that busyness is a sign of success is that multi-tasking is necessary for productivity (or even survival).

But skilled multi-tasking is actually nothing to brag about. Multi-tasking is the enemy of focus. The human brain did not evolve to focus on many things at once; it evolved to focus on one thing at a time. And so the brain does not actually ever multitask. It can’t actually run multiple apps at any one time; it can only switch rapidly between tasks. This is a giant energy drain for your brain.

Multi-tasking is the enemy of focus. The human brain did not evolve to focus on many things at once. Click To Tweet

Research has shown that multitasking:

1. Keeps us from learning easily and recalling what we need to know. When we constantly switch our attention from one thing to another, which we do super-rapidly when we multitask, our overloaded brain stops using the hippocampus, which is the area of the brain responsible for learning and memory. This makes it nearly impossible to learn something new while multitasking, and it hinders our ability to recall what we already know.

2. Makes it harder for us to ignore irrelevant information. Which ironically makes us feel more overwhelmed.

3. Hinders our ability to organize our thoughts, which slows us down and makes us prone to doing unimportant and irrelevant work.

4. Cripples our ability to transition from one task or activity to another. Another irony, giving that multitasking IS rapid switching (from the brain’s perspective).

5. Increases the odds that a person will suffer from anxiety and depression. It also makes it more likely that we will experience boredom.

6. It increases our stress and tensions levels, and this is exhausting.

7. It slows down the speed of our work, but increases our error rate. Despite the widespread belief that multitasking is a productivity technique, wouldn’t you say that anything that makes us slower and decreases the quality of our work is, um, not really a best practice?

When we just focus on one task at a time, we’re actually more productive in the long run, and we’re less exhausted at the end of the day. This is because multitasking exhausts more energy and time than single-tasking does.

Take it from productivity experts Tony Schwartz and Catherine McCarthy:

A temporary shift in attention from one task to another—stopping to answer an email or take a phone call, for instance—increased the amount of time necessary to finish the primary task by as much as 25 percent, a phenomenon known as “switching time.”

It used to actually be harder for me to single-task than it was to multitask; true focus can require a lot of willpower in this day and age. But when we set ourselves up to focus–to single-task–we allow ourselves to access that unique brain state that allows us to do our best work. And time seems to stand still. This is the very opposite of busyness.

The first and most important step to finding your flow is to build yourself a fortress against interruption so that you can single-task instead of multitask. If you can’t concentrate, you can’t be in your sweet spot. Period.

Multitasking is a state of continual interruption.

And if you keep getting interrupted, you can’t achieve the state of deep concentration that you need for flow. Even if you like the interruptions (as when you get funny texts from a friend). Even if the interruptions are good for your work (as when a colleague stops by to answer a question). If you take one thing away from this unit, let it be this: No focus, no flow.